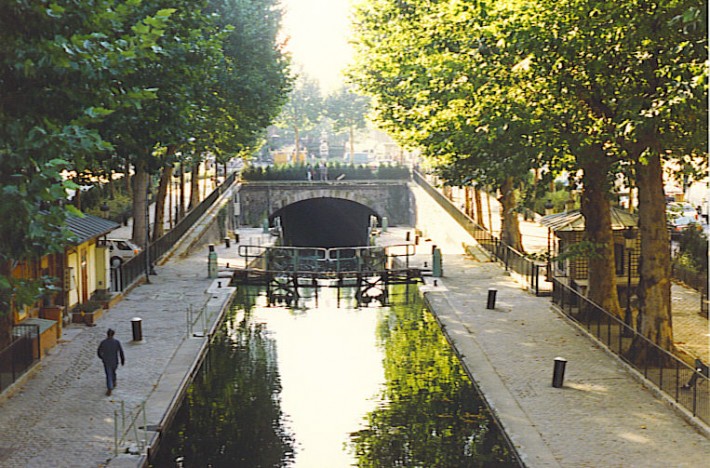 It’s difficult to imagine what lies at the bottom of a small, quiet and uneventful canal such as the Canal Saint-Martin, which winds its way through the 1oth and 11th arrondissements of Paris! Don’t worry, there are no dead bodies, just a motley collection of objects surreptitiously thrown into it as if their owners had preferred to consign them to this living museum rather than to a dumpster… For a few weeks the canal remains drained and provides passersby with a feast for the eyes.

This minor waterway that flows along the banks of Jemmapes and Valmy exudes a special atmosphere because it is suddenly frozen in time. The poetry of its century-old plane trees and chestnut trees mingles with the mystery of its subterranean vaults.

Now drained of all its water, it reveals its treasures, these everyday objects such as computers, bicycles and scooters, and most unusually, this seamstress bust. Coated in greyish sludge, they already look fossilised.

It was last cleaned 15 years ago

In French river terminology, the emptying and curettage process of a canal is called “chômage”. 90,000 m3 of water are being drained along a 4.5 km stretch. It’s a monumental task, painstakingly performed with nets because the large number of fish that have lost their way en route are being redirected towards the Seine and will thus find their friends.

Jean Papoul, who has dedicated his life to the canals of Paris, recounts that a long time ago, during a draining, this submerged museum even revealed some gold coins…

It was only in 1993 that the Canal Saint-Martin was registered as an historical monument. This project, conceived under the Ancien Régime and inaugurated in 1825, had a medical function as it was intended to supply the city of Paris, where the supply was inadequate, with drinking water.

Today, this heritage, which includes swing bridges, fixed bridges and quaint footbridges, is preserved for its historical value but also for the biodiversity that it encompasses, with a very abundant flora and fish fauna.